Swedberg Drug During the 1950's 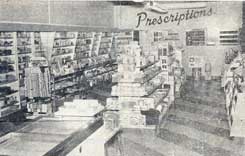 The interior of Swedberg Drug in the 1950's

Swedberg Drug in the 1950's
Bob Swedberg started his pharmacy in a building that was 80 feet long. He didn't have enough inventory to fill the entire space so he placed the pharmacy about 50 feet back so the front-end looked fuller. As time passed he continued to move the pharmacy back eventually adding onto the building to provide more space. 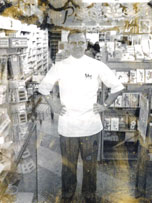 Bob standing in front of the pharmacy department

Swedberg puts in long hours
Because of Bob's drive and determination to run a successful pharmacy he put in long hours. He would open at 8:00 AM and close at 6:00 PM but his day was still not over. Bob would go home after work to be with his wife and children. After the kids were in bed he would return to the drugstore and work until Midnight. Bob worked late every night but Friday evening because that was the night he would have his weekly date with his wife Kathy. 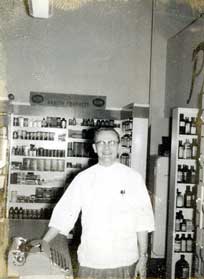 Bob Swedberg standing in the pharmacy of his drugstore

Swedberg was Always Improving his Pharmacy
Bob Swedberg continued to make improvements to his drugstore. Here is a picture of Bob prior to one of his many remodeling jobs. Notice how neat and orderly the dispensatory is.

Bob has always been an asset to the practice of pharmacy because he was methodical and focused upon being the best pharmacist possible. This drive for excellence that exemplifies the life of Bob Swedberg has always served to motivate others to try harder and do things they didn’t think they were capable of! Bob Swedberg has helped more people because of his drive for excellence, his positive attitude and helpfulness to others, than anyone could ever determine! I’m speaking from experience!