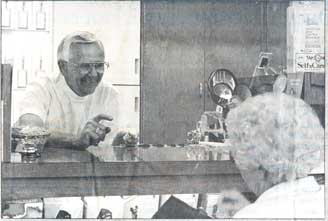 This Appeared in the St. Peter Herald on June 1, 1987
By David Fosburgh
After 33 years of counting pills, chatting with customers, and suggesting over-the-counter drugs they should buy, Bob Swedberg capped his last prescription bottle on Thursday, May 28. [1987]

Actually, Swedberg entered semi-retirement in September of 1986. He and his son, Gary, sold Swedberg Snyder Drug to Bill Soderlund and his son, Bill. The store at 201 Third Street became, “Village Snyder Drug.” However, Swedberg and his wife, Kathy, continued to work part-time at the store until last week.

“All three of our kids grew up working here,” Swedberg commented. ‘Here’ was actually two buildings, as the Swedbergs originally had their business at 324 South Minnesota Avenue. Before Bob and his family moved to St. Peter in 1955, the Schaefer Brothers had their pharmacy in the 1899 structure.

The Swedbergs moved their business into the new building in 1979, and Bud Braun, now retired, moved his clothing store into Swedberg’s old store.

Retirement will not bring on the “now what?” question for Swedberg. “I’m going to live it up,” he joked, while processing information into his computer. “Right now I’m only playing golf twice a week.”

Actually, serving on various committees in town and pursuing his other varied interests will no doubt keep Swedberg occupied. As far as leaving his life’s work behind is concerned, Swedberg said “I’m going to miss the contact with the people. This is the only place I get to see many of them.”