Fowler's Solution as Understood in 1848
Chemical History.—Both the metal and its oxide occur in nature, either tolerably pure or in combination with other metals and metallic oxides. The oxide or white arsenic of the shops, however, is understood to be all obtained from the refuse found in the flues of furnaces where other metallic ores under-go the process of roasting, and more especially from the refuse of the roasting of the arseniuret of cobalt in the preparation of zaffre. The impure material from the flues is subjected to a second sublimation, and is thus obtained in a state of considerable purity. The product, indeed, as now found in the shops of this country, is so free from impurity as scarcely to require the additional sublimation once enjoined in all the Pharmacopoeias, and still recommended by the College of Dublin.

The medico-legal relations of this substance are highly important,—more so perhaps than those of any other article used in medicine or the arts. Its medico-legal chemistry must therefore be touched on here; but it would be out of place to attempt more than a sketch of so comprehensive a subject. The following statement is, therefore, a mere summary of what the reader will find laid down in detail in my own and other works on Toxicology.

Actions and Uses of Fowler's Solution

Arsenious acid is in large doses an irritant and in small doses a tonic; and by virtue of its tonic action it possesses febrifuge and alternative properties. As an irritant it is a poison, and a very powerful one, a few grains being adequate to occasion death. Its particular effects as a poison are extremely diversified. It produces, where it is directly applied, irritation and inflammation; which, on the external surface of the body, especially on the surface of a sore, is commonly followed by sloughing; and which, when the poison is swallowed, gives rise to all the symptoms of acute inflammation of the alimentary mucous membrane. The other mucous surfaces are also often affected simultaneously, and in particular the mucous membrane of the genito-urinary organs. These local affections are always attended with extreme depression of the circulation; and sometimes the symptoms of this disorder are the only prominent features, so that death seems to take place from mortal faintness. A great multiplicity of secondary affections has farther been observed, among which the most frequent and most remarkable are partial palsy, epileptic convulsions, and dyspepsia with emaciation. The greater part of the effects now mentioned may be produced through whatever channel the poison has entered the body,—by the stomach, rectum, vagina, nostrils, cellular tissue, lungs, an ulcer, or even the sound skin ; and in particular it is remarked, that, through whatever channel the poison is introduced, it is apt to excite inflammation of the alimentary canal and of the other mucous surfaces. It has been doubted whether any antidote exists for the poisonous operation of arsenic, and a great number of substances successively proposed as such, have been in turn proved to be inactive. A strong case has been made out for the hydrated sesquioxide of iron, suggested a few years ago by Messrs. Bunsen and Berthold; so that every druggist ought to have that substance in readiness (see Ferrugo). Notwithstanding what has been stated by some to the contrary, it certainly possesses the property, particularly in the state of pulp, but also when in dry powder, of removing every particle of arsenious acid from solution in water. It appears to act by forming an insoluble arsenite of iron, and about twelve parts are required to remove one of while arsenic [MaclaganJ. Magnesia has been found by Bussy to act in a similar manner. It is most efficacious when recently precipitated in the gelatinous state from its sulphate by potash. The next best form is the light calcined magnesia of the shops; but the dense magnesia has very litlle action.

The tonic action of small doses of arsenious acid, like the action of tonic remedies in general, is scarcely marked by any physiological phenomena, and is chiefly shown by its secondary influence in subduing various morbid states of the animal system. When given continuously in very small doses for some time, the physiological effects commonly presented are, some acceleration and increased hardness of the pulse, a sense of itchiness or prickling, with tenderness of the eyes, a silvery whiteness of the tongue, some swelling of the eyelids, and a livid circle round them; afterwards, weakness of the stomach, tormina, or a sense of heat about the anus, and lowness of spirits. It does not appear whether the development of these effects is essential to the establishment of the therapeutic effects which are usually referred to its tonic action. The reverse is commonly believed. But, at the same time, there can be no doubt that such physiological phenomena generally show themselves where it is successfully used as a therapeutic agent. They must always be attended to as the earliest signs of its poisonous operation, and as indicating, therefore, the necessity of suspending it.

On account of the properties adverted to, arsenious acid has long been much employed, both as an external and an internal remedy. Externally it has been used chiefly in the several varieties of malignant ulceration, such as cancer, lupus, nolime-tangere, and fungus hasmatodes, with the view of inducing healthy action. The usual effect is, death of the part acted on, and its subsequent separation by sloughing ; after which, a healthier surface may be, for a time, produced. Doubts are entertained, however, in the present day, whether any real advantage is ultimately obtained in true malignant ulceration ; and the practice, from having been, at one time, very general, is now abandoned by British surgeons. A great variety of nostrums containing arsenic have been proposed for the purpose, both by regular and irregular practitioners, among which may be mentioned the powder of Frere-Cosme, the Pate de Rousillot, and Plunkett's paste; in all of them, the only essential ingredient is arsenious acid, and it signifies very little what it is mixed with, provided it be not rendered insoluble by chemical combination. As good a mode of applying it as any other, is to form it into an ointment with axunge, or into a paste with conserve of roses, thickened, if necessary, with powder of gum; and to add some powder of opium to allay the pain. Arsenical ointments and pastes ought not to be applied to a bleeding surface, otherwise, absorption may ensue, and formidable symptoms of poisoning. Absorption seems less likely to occur where a strong arsenical mixture is used, containing a tenth, or even a fourth part of its weight of arsenious acid, than when the weaker mixtures are applied, which are made use of generally on the continent.——— Arsenic has also been used as an application for the obstinate ulcers which sometimes occur at the roots of the nails. It is, farther, one of the remedies which have been most trusted to by some for arresting hospital gangrene.— Dr. Blackadder first strongly recommended it in this disease ; and he used it in the form of Fowler's solution, which was applied by means of pledgets frequently renewed, until a dry slough covered the whole surface of the sore. Its employment as an external remedy for some cutaneous diseases, and for destroying vermin on the skin, cannot be approved of; for fatal accidents have, in consequence, not unfrequently resulted.

Internally, arsenious acid has been principally resorted to for the cure of periodic intermitting diseases, such as ague, periodic neuralgia and epilepsy. It was as a remedy for ague that it seems to have been first introduced currently into medical practice; and ever since the writings of Fowler, towards the close of last century, it has been generally regarded as a valuable febrifuge, second only to cinchona and its alkaloids, in the power of arresting the paroxysms of intermittent. About eight days of treatment are sufficient for a fair trial of its virtues. The development of the physiological phenomena, formerly mentioned as the first signs of its poisonous operation when given continuously in small doses, is not necessary to its febrifuge action. In periodic neuralgia, arsenious acid has often proved a useful remedy, especially in intermitting headache. It is one of the standard remedies in epilepsy, and is, perhaps, fully as often successful as any other method of cure. But it is far,from being so trustworthy as some maintain; and, since it must be continued a great length of time, troublesome effects are apt to accrue from its physiological operation. Among other phenomena in such circumstances, desquamation of the cuticle, dropping of the nails, and falling out of the hair, have been observed. I have known it serviceable in one instance, where these results occurred. Among the other diseases for which it has been used, none require particular mention except chronic rheumatism, and scaly cutaneous diseases. In that form of chronic rheumatism whicli is accompanied with firm swelling of the small joints of the hands, it is, undoubtedly, a useful remedy, as was first stated by Dr. Haygarth; but it is of less service in the other forms of the disease. I have known several cases of this " nodosity of the joints," as some authors term it, get well under the continuous administration of arsenic for some weeks ; and it appeared to me, that the commencement of the cure concurred with the first development of the physiological effects. In cutaneous diseases of the chronic kind, it was strongly recommended by Mr. Girdlestone, and it is now a staple remedy in some of the more obstinate species of scaly cutaneous disorders, such as lepra and psoriasis. It is less esteemed in other skin diseases. Among the other special applications of arsenious acid, may be here merely mentioned its employment in dropsy, syphilis, palsy, nervous tremor and chorea, scrofula, tetanus, and the effects of the bite of venomous snakes. In these affections it has been resorted to, on the whole, empirically, and with doubtful advantage.

When administered internally, it is usually given in the form of the arsenical solution. Some have thought the arseniate of potash a more manageable preparation, and less apt to induce troublesome physiological effects ; but there seem no good grounds for such preference. Very .small doses must be given, not exceeding an eighth of a grain ; and where it is judged necessary to push the remedy far, it is better to multiply the doses than to increase their amount, otherwise the stomach is apt to suffer. It has been advised to administer the doses after meals instead of before them, as is practised in regard to most other medicines ; but dilution seems a more rational way of preventing any unpleasant immediate operation on the stomach. The first approach of the symptoms of its physiological action formerly mentioned must be diligently watched ; and the doses must be suspended on their appearance. The best correctives when these symptoms have appeared, and the best preventive in a long course of arsenic, is a little opium, with the administration of nutritive food in small quantities at a time.—Very large doses of arsenious acid have been given by some, such as a quarter of a grain and even onwards to an entire grain. But this practice is not worthy of imitation. The slight physiological effects occasionally developed by such doses have been probably owing either to idiosyncrasy or to the drug having been given with other substances which tend to blunt its action. Thus when the powder of arsenious acid is enveloped in charcoal-powder, it would appear to be rendered inert or nearly so, even although taken in poisonous doses, exceeding those now specified.

This information was taken from.... 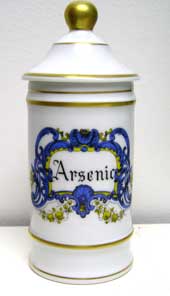 Interestingly, the FDA approved Arsenic trioxide (Trisenox), in September of 2000 to treat patients with acute promyelocytic leukemia. It shows that some of the older drugs are still being used medicinally. The following information is taken from a dispensatory from 1848 and deals with potassium arsenite.