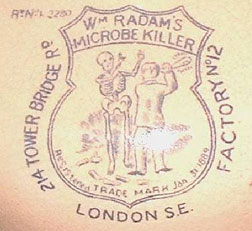 Wm. Radam, a contemporary of Pasteur, believed that all the ailments of the body were a result of microbial infestation of the blood and tissues. He experimented with a variety of chemicals to kill off these terrible bugs and patented his mixture in 1886. His product contained sulfur, nitrate of soda, black oxide of manganese, sandalwood, chloride of potash, wine, pink dye and water.

Wm. Radam’s claim to fame is the logo he designed for his products. He recycled the mythological image of Hercules fighting a multi-headed Hydra from ancient art and came up with a man in a business suit bludgeoning a skeleton as his logo. 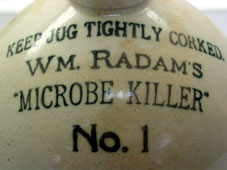 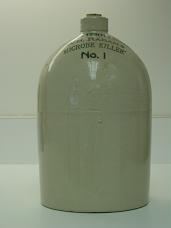 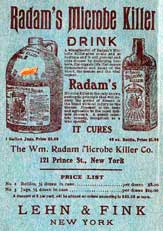 The following in an ad that was in the Lehn & Fink Drug Catalog of 1906...
Radam’s Microbe Killer
Drink
A wineglassful of Radam's Microbe Killer after meals and at bedtime and it will prevent and cure disease by destroying bacteria, the organic life that causes fermentation and decay of the blood, the tissues and the vital organs.

Radam's
Microbe Killer is the only known antiseptic principle that will destroy the germs of disease in the blood without injury to the tissues. Pleasant to the taste and agreeable to the most delicate stomach. A purely scientific remedy, recognized as a true specific.
It Cures
I Gallon Jugs, Price $3.00 40 Oz. Bottle, Price $1.99