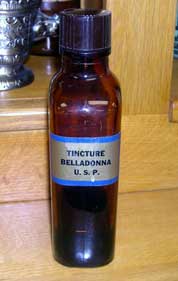 Uses.—The action of belladonna upon the system is that of atropine. (See p. 214.) All parts of the plant are poisonous. It is not uncommon, in countries where it grows wild, for children to pick and eat the berries, allured by their fine color and sweet taste. Soon after the poison has been swallowed, its peculiar influence is experienced in dryness of the mouth and fauces, burning in the throat and stomach, great thirst, difficult deglutition, loss of vision, vertigo, and intoxication or delirium, with violent gestures and sometimes fits of laughter, followed by coma. A feeble pulse, cold extremities, subsultus tendinum, deep coma or delirium, and sometimes convulsions, precede death. To oWiate the poisonous influence of the belladonna the most effectual method is to evacuate the stomach as speedily as possible, by means of emetics or the stomach tube, and afterwards to cleanse the bowels by purgatives and enemata. The infusion of galls and compound solution of iodine have been recommended as antidotes. Both morphine and pilocarpine are to some extent physiologically antagonistic to atropine, and have been found very useful in belladonna poisoning. (See B. M. J., Feb. 1890.) They should be given hypodermically.

Belladonna has been used as a medicine from early times. The leaves were first employed externally to discuss soirrJious tumors and heal cancerous and other ill-conditioned ulcers, and were afterwards administered, internally for the same purpose. Belladonna has acquired considerable credit as a preventive of scarlatina,— an application of the remedy first suggested by the author of the homoeopathic doctrine,— but it is absolutely devoid of any such power. For further information, see Atropina.

The extract is much used locally. Rubbed upon the areola of the breast, it has been found to arrest the secretion of milk; upon the abdomen, to relieve the vomiting of pregnancy, and other irritations sympathetic with the gravid uterus. In cardiac diseases the plaster is often applied with advantage over the heart. The decoction or extract, applied to the neck of the uterus, is asserted to have hastened tedious labor dependent on rigidity of the os cervicis; and spasmodic stricture of the urethra, neck of the bladder, and sphincter ani, anal fissures, and painful uterine affections, have been relieved by the local use of the extract, either smeared upon bougies or administered by injection. In the latter mode it has relieved strangulated hernia. It is asserted also to be useful in paraphimosis. The inhalation of the vapor from a decoction of the leaves or extract has been recommended in spasmodic asthma. For this purpose, two drachms of the leaves, or fifteen grains of the aqueous extract, are employed to the pint of water. A much better plan is to smoke the dried leaves in the form of a cigarette or in a pipe. Relief is said to have been obtained in phthisis by smoking the leaves, infused when fresh in a strong solution of opium, and then dried.
Belladonna should never be given in substance, but in the form of extract or tincture, or, when accuracy or quickness of action is desired, of atropine. 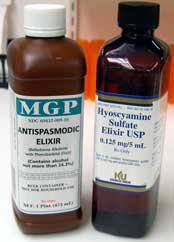