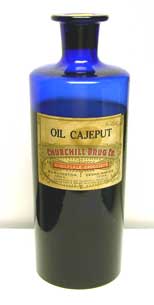 Oil Cajeput by the Chruchill Drug Co circa 1910

Cajuput Oil or Oleum Cajuputi (U.S.P. 1820 to 1936) is the volatile oil distilled from the fresh leaves and twigs of several varieties of Melaleuca leucadendron (Fam. Myrtacese), and rectified by steam distillation. The plants are found in the Philip-pines, the East Indies and Australia. Oil of cajuput contains from 50 to 65 per cent of eucalyptol (cajuputol), terpineol and various terpenes. It is used externally as a parasiticide and internally as a carminative, stimulant and diaphoretic. 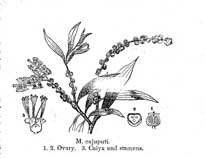 Cajeput tree from book written in 1848

This oil is highly stimulant, producing when swallowed, a sense of heat, with an increased fullness and frequency of pulse, and exciting in some instances profuse perspiration. It is much esteemed by the Malays and other people of the East, who consider it a panacea. Formerly the oil of cajuput was used internally in chronic rheumatism, and various other complaints, but is rarely employed at present for this purpose. It is useful internally as a stimulating expectorant in chronic laryngitis and bronchitis, and as an anthelmintic, especially against the roundworm. Its most frequent uses, however, are externally in the treatment of various skin diseases. For this latter group of affections it is used for its antiparasitic effect in such diseases as scabies, tinea versicolor, etc., and for its stimulating action in acne rosaces, psoriasis, and other chronic conditions. It is also used externally as a counterirritant in chronic rheumatism and other painful conditions. Like many other essential oils it relieves toothache if introduced into the hollow carious tooth.
Dose, from three to ten minims (0.2-0.6 cc.).
Off. Prep.—Spiritus Cajuputi, Br. 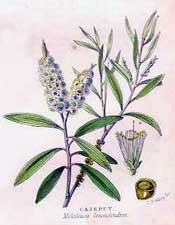 M. cajuputi. the tree that cajeput oil comes from

OIL of CAJEPUT has been known in Europe for above two centuries. Rumphius first described the tree which produces it under the name of Arbor alba, a literal translation of one of its Malay names, Cayu-puti, or White-tree. Several botanists have described it in more recent times; but the species was generally mistaken till the researches of Sir J. Smith, published in 1819 in Rees' Cyclopaedia, and those of Roxburgh, first made public after his death by Mr. Colebrooke in the Medico-Botanical Transac-tions for 1828. Rumphius accurately distinguishes two closely allied species under the names Arbor alba major and minor. The former was generally considered the source of cajeput-oil, probably because the Malays apply to it chiefly the name of Cayuputi,—its more correct Malay name, however, being Cayu-Gelam. This is the Melaleuca Leucadendron of modern botanists, an inhabitant of most of the Molucca Isles, and abounding on Amboyna, but more especially on Boerou and Ceram. It appears, however, from the inquiries of Smith and of Roxburgh that the usual reference to this species is a mistake; that the Arbor alba major of Rumphius, contrary to his statement, has no odour ; and that cajeput-oil is the produce only of his Arbor alba minor, the Melaleuca minor of Smith as well as Decandolle, or M. Cajuputi of Roxburgh, Lindley, and others. This plant belongs to the Linnaean class arrtl order Polyadelphia Jcosandria, and to the Natural family Myrtacese. It is a crooked tree, about twenty feet high, a native of several of the Molucca Isles, especially of Boerou and Manipa, and also of the southern part of Borneo, but not of Amboyna.

M. cajuputi. Like the Other species, it is sometimes called by the natives Cayu-puti, but its correct Malay name is Daun-Kitsjil. It closely resembles the M. Leucadendron. But it differs in its stature being much less, —its leaves three or five-nerved and silky while young,—and its flower-spike shorter, broader, and not interrupted. The M. Leucadendron is fifty or sixty feet high; its flower-spike is interrupted; audits leaves are five-nerved, al-ways smooth, destitute of odour, and incapable of yielding oil by distillation (Roxburgh).

This information was taken from....
Christison and Griffith's Dispensatory 1848
(A Dispensatory or Commentary on the Pharmacopeias of Great Britan and the United States)
Lea and Blanchard publishers of Philadelphia