Cannabis was used in the practice of pharmacy for centuries. Interestingly, one could buy Cannabin, hashish like resin, in 1906 for 25 cents per gram or $2.40 per ounce. (According To the "Lehn & Fink Wholesale Druggists and Manufacturing Chemists of New York" Catalog)

In 1931 the Federal Bureau of Narcotics was formed and developed a philosophy with respect to medicinal cannabis. In 1937, Harry Anslinger, the head of the Federal Bureau of Narcotics, created a regulation, the “Marijuana Tax Act”, that required a dispenser of cannabis to pay a $1.00 tax. This in essence removed cannabis from the medical community. In 1941 the US Pharmacopoeia dropped Cannabis from its listing though the US Dispensatory continued to list it at least until 1943.

Cannabis, Indian Hemp, American Hemp (U.S.P. 1873 to 1942) consists of the dried flowering tops of the pistillate plants of Cannabis sativa Linne (Fam. Moracese); an extract of Indian hemp was recognized in the U.S.P. of 1862, though the drug itself was not recognized. The drug was formerly known as Cannabis Indica.

The plant is an annual herb indigenous to central and western Asia, and is cultivated in India and other tropical and temperate regions for the fiber and seed. Cannabis is the ancient Greek name for hemp. Cannabis was used in China and India, spreading slowly through Persia to the Arabs, and it probably was introduced into European and American materia medica about the time of Napoleon.

The unusual sensations induced in man by the controlled use of cannabis are obtained from inhaling the smoke of burning cannabis, more promptly and with less drug, than by oral dosage. Some decades ago unscrupulous persons began the importation into the United States of rather crude Mexican cannabis (Marihuana) cigarettes for sale at high prices. As the demand for these cigarettes (reefers) increased and the habit of smoking them spread even to school children, federal and state narcotic agents started a campaign to stamp out their sale. The impor-tation of Indian cannabis was prohibited and even large areas of growing American hemp were destroyed. This campaign has been successful; however, the official substitution of a poor quality drug for the high quality Indian cannabis, along with the marihuana campaign, has cost the materia medica a valuable drug, for the medicinal use of cannabis in the United States has been discontinued.

For the description of the whole drug and characteristics of the powdered drug, see Figure 184 and the U. S. Pharmacopeia XL. Indian cannabis contains 15 to 20 per cent of a resin, cannabin; cannabinol (cannabinon), a red, oily substance said to possess the intoxicating properties of the drug; a yellowish volatile oil; a volatile alkaloid, cannabinine; ash from 12.2 to 18 per cent, with about 2.75 per cent of acid-insoluble ash, the latter being made up largely of fragments of the silicified non-glandular hairs. The drug is said to lose its activity when in the powdered condition. It has been used as a sedative, an analgesic and a narcotic.

Physiologically active cannabis also comes from Turkestan, Asia Minor, France, Italy, Spain and Mexico, and from the warmer and more arid regions in the United States. Cannabis is cultivated to a considerable extent for its bast fibers, hemp, and fruits, hempseed; the latter contain about 20 per cent of a fixed oil which is used for culinary purposes and in the manufacture of paints and soap, the cake meal being used as cattle food. 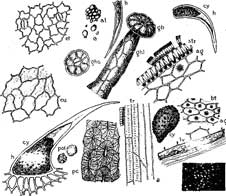 Various morphology and structure of cannabis

Powdered Cannabis Indica: el, epidermis from lower surface of leaves with sinuate vertical walls and numerous oval stomata, and eu, from upper surface, with straight walls and no stomata; h, non-glandular hairs numerous, unicellular, rigid, curved, with a slender pointed apex and an enlarged base, usually containing a cystolith (cy) but frequently broken and the cystolith freed; glandular hairs of two kinds, one with a short 1-celled stalk (ghs) and the other with a long multicellular stalk (ghT), the head (gh) in both kinds being globular and consisting of 8 to 16 cells; bt, fragments of bracts and leaves showing yellowish brown laticiferous vessels (Iv), numerous rosette aggregates (ag) of calcium oxalate, 5 to 30 microns in diameter, strands of spiral (str) or reticulate (tr) tracheae, and phloem; (pc), fragments of fruits with palisade-like, non-lignified cells with yellowish brown, finely porous walls; tissues of embryo and endosperm with numerous oil globules and aleurone grains (al), the latter 5 to 10 microns in diameter and displaying crystalloids and globoids; pol, pollen grains; mic, photomicrograph of leaf fragment showing a rosette aggregate of cajcium oxalate crystals in nearly every cell. (Drawings by Paul D. Carpenter.)

Gathercoal and Wirth “PHARMACOGNOSY” By Edward P. Claus, Ph.D. Professor of Pharmacognosy and Head of the Department, University of Pittsburgh School of Pharmacy, Member of the Advisory Panel on Pharmacognosy National Formulary (Third Edition, Thoroughly Revised 306 1956)