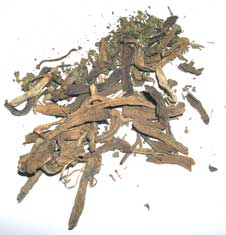 Hyoscyamus Oil—Expressed Fixed oil expressed from seeds of Hyoscyamus niger L. It is not narcotic; possesses only the properties of a fixed oil. 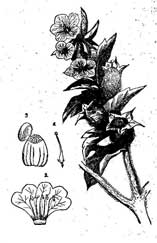 Uses of Hyoscyamus
1940: Uses.—As the dominant active principle of hyoscyamus is, like that of belladonna, hyoscyamine (see under Atropina) the therapeutic effects are very similar to those of belladonna although it must be given in considerably larger doses. Its action, however, is more or less modified by the presence of scopolamine which imparts a central narcotic effect (see under Scopolamina Hydrobromidum); but as the proportion of the two alkaloids must vary greatly in different speci-mens of the plant, it seems to us that it would be more rational, where the combined effect is desired, to add scopolamine in the proper propor-tions to a preparation of belladonna. Its most important use is in relief of painful spasmodic affections of the unstriped muscle, as in lead colic and irritable bladder. It is also employed to allay nervous irritation, as in various forms of hysteria or irritable cough, but is inferior to scopolamine for these purposes. Externally cata-plasms or fomentations of the fresh leaves have been employed to allay pain but its employment for this purpose is of doubtful advantage.

1848: Uses.—Its irritant properties are obscure, being confined to the production of dryness and rawness of the throat, when it is given in large doses, together with some tendency to act upon the bowels. It is, on the contrary, a very powerful narcotic, dangerously poisonous when taken freely, and, in small doses, anodyne, hypnotic, calmative and antispasmodic. As a poison, it produces, like several other solanaceous vegetables, a precursory stage of delirium, with loss of vision and dilated pupils—and then deep, pure sopor, with exces-sive dilatation of the pupil—to which, in cases of recovery, a second stage of delirium often succeeds. Emetics and the stomach-pump, blood-letting, stimu-lants, and afterwards acids, are the chief remedies in such cases. Every part of the plant is poisonous, the roots being feeblest, the seeds most ener-getic. The roots,—which have been the most common cause of incidental poisoning with henbane, in consequence of their resemblance, not very strik-ing, however, to parsnips,—appear almost inert early in spring, and acquire activity only when the plant is in full vegetation during the summer (Orfila). In medicinal doses, hyoscyamus allays pain, soothes excitability, induces sleep, and arrests spasm ; and it is much employed for these purposes, espe-cially in Britain. Its utility as an anodyne and hypnotic has been denied by some French writers, on the authority of extensive trials made by Fouquier. But British experience is decidedly in its favour. With some people, and probably more often than opium, it occasions excitement and anxiety, head-ache, unpleasant dreams, spectral illusions, and delirious talking. These effects I have observed to be most frequent where a febrile state of the constitution prevails, and, above all, if the head be peculiarly affected. More generally, however, it induces soft refreshing sleep, and that, too, sometimes, in cases where opium disagrees in all shapes. It has the peculiar advantage over opium as an habitual hypnotic, that it does not constipate the bowels, but, if anything, even loosens them. It possesses the valuable property of prevent-ing the tormina produced by some active cathartics, such as scammony, colo-cynth and aloes, yet without impairing their energy. When applied outwardly, it sometimes relieves local pains, like the allied plant belladonna; and it dilates powerfully the pupil when applied to the eye. Its special applications may be inferred from this view of its actions. It is given in a general way to obtain sleep, particularly where opium disagrees, or where constipation must be avoided,—in neuralgic affections, both inwardly and outwardly,—in spasmo-dic diseases of all kinds,—in croup, gout, rheumatism, and other inflamma-tions, if attended with troublesome nervous excitability, and not with high fever,—in all forms of chronic cough, whatsoever its nature or cause,—and in most irritations of the urinary organs. It was at one time considered a deobstruent and alterative in chronic diseases of the lymphatic glands ; but this opinion is obsolete. Probably, the chief consumption of it now-a-daya is in combination with those purgatives which cause griping, and more especially with the compound oolocynth pill-mass. The Edinburgh Pharmacopoeia has a preparation of this kind, the Pilula colocynthidis et hyoscyami, which is probably the most unerring, yet mildest of all laxative pills, and is, at present, in extensive demand. Hyoscyamus has never come into use in this country as a remedy for dilating the pupil, or as a topical anodyne; but it is probably little, if at all, inferior for these purposes to belladonna. The best preparation for general use as an anodyne and hypnotic, is the tincture. The chief form for combining with purgatives is the extract. For external use, a poultice of the leaves may be employed, or the continental Oleum coc-tum hyoscyami.
The Hyoscyamia of Geiger and Hesse is a powerful narcotic poison.— When it is applied in minute quantity to the eye, it dilates the pupil exceslively, and for a long time, yet without impairing vision. The impure oleagi-nous principle of Brandes acts similarly. The empyreumatic oil is an energetic narcotic poison. The relations subsisting between the properties of these three substances and those of hyoscyamus itself, have been hitherto little investigated.