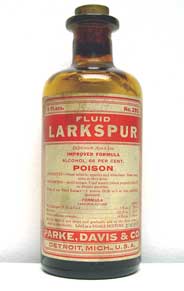 Fluid Larkspur was made by the Parke, Davis & Co. in a 4 fluid ounce bottles with the number (No. 285). It was made from Delphinium Ajacis Lin. and contained 66% alcohol.

The formula on the bottle was directions to make a lotion as follows: fluid Larkspur 1 ounce, Alcohol 1/2 ounce, q.s. Water 16 ounces.

In 1907 Larkspur was understood as follows:
In large doses the seeds produce violent vomiting and purging, and are said to be diuretic. They were formerly in the Secondary List of the U. S. Pharmacopoeia, and a tincture (1 fl. oz. to 1 pint diluted alcohol) has been used in spasmodic asthma and dropsy. Dose, ten minims (0.6 Cc.), gradually increased.

Surprisingly the 1848 Dispensatory states that Larkspur had little value but was prized in the previous century.

Larkspur (U.S.P. 1820 to 1882; N.F. 1916 to 1926 [D. Consolida}; N.F. 1916 to 1955 [ D. Ajacis]) is the dried ripe seed of Delphinium Ajacis Linne (Fam. Ranunculacex), A member of the buttercup family of flowers. The generic name Delphinium is from the Greek, meaning "dolphin," so-called because the nectary resembles the figure of a dolphin; Ajacis is after Ajax; Consolida refers to its supposed power to heal or consolidate wounds.

The plants are annuals, indigenous to central Europe and widely cultivated in America as garden plants. The drug is imported from Europe. Delphinium seeds were employed by the Greeks and Romans as emetics and cathartics, but due to their poisonous nature their internal use has long since been discontinued.

DESCRIPTION, STRUCTURE AND POWDER.—See the National Formulary IX. The seeds of Delphinium Consolida differ from those of D. Ajacis in that the rows of tangentially elongated epidermal cells are scalloped or form scale-like projections and slant toward the base of the seed and the cells are smaller, up to about 30 microns in width and 350 microns in length.

CONSTITUENTS.—The principal constituent is the alkaloid delphinine, which crystallizes in rhombic prisms and resembles aeonitine in its physiological properties. Other constituents include ajacine, fixed oil, resin, gallic and aconitic acids.
STANDARDS.—Larkspur contains not more than 2 per cent of foreign organic matter, and yields not more than 2 per cent of acid-insoluble ash.

USES.—Delphinium is used externally in the form of a tincture as a parasiticide.