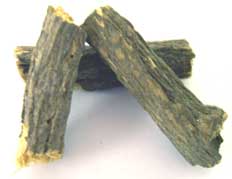 Glycyrrhiza glabra Linne or licorice is a root.

The licorice plant is a perennial herb whose underground portion consists of a slender branch-ing rhizome bearing a number of delicate root-lets. The stems are herbaceous, erect, slightly branching, and usually three or four feet in height. The leaves are alternate, pinnate, con-sisting of several pairs of ovate, blunt, petiolate leaflets, with a single leaflet at the end, of a pale-green color, and clammy on their under sur-face. The flowers are papilionaceous, pale laven-der to violet, and arranged in axillary spikes sup-ported on long peduncles. The calyx is tubular and persistent. The fruit is a compressed, smooth, acute, one-celled legume, containing from one to six small kidney-shaped seeds. This plant grows best on sandy or clay soil in valleys which are subject to occasional inundation from near-by rivers. It is indigenous to Spain, southern Italy, Greece, Asia Minor, Syria, Iraq, Caucasian and Transcaspian Russia and northern China. All of these sources lie close to the 40th parallel of north latitude. Small quantities have from time to time been produced in other countries but as sources of supply they are negligible. The experimental plantings in the United States, made from about 1895 to 1918, appear to have virtually died out, but it is thought that the southwest of this country would provide favorable condi-tions, such as a definite dry season and absence of severe freezing. A small quantity of licorice root is growing wild in the Salt River Valley in Arizona (1942). The classification of the licorice plant into species and varieties has not been well established, but Viehoever (1936, un-published communication) considers that Spanish and Italian licorice are from G. glabra typica and the Anatolian and Russian from G. glabra glandulifera; Syrian, in the main, is a hybrid of Spanish and Iraq (violacea). His conclusions are tentative because many specimens examined were immature. Iraq licorice root, growing in the val-leys of the Tigris and Euphrates, is usually thicker than that from other countries.

Asiatic licorice, known as "Chuntschir" is ob-tained from G. uralensis Fisch. The plant is found in Siberia, Turkestan and Mongolia, and is grown on a large scale in the Fengtien province of China. During the war of 1914-1918, when transportation of licorice root through the Mediterranean was prevented, large quantities of Chinese licorice root were brought to the United States across the Pacific Ocean. The yield of extract from Chinese licorice root is about as high as that from Russian and Anatolian, but the Chinese extract is markedly pungent, which is undesirable; it is said to be used in soy sauce.

G. echinata L. is grown for its root in the northern provinces of China. It was formerly exported to Russia.

G. lepidota (Nutt.) Pursh. grows abundantly from Missouri westward to northern California. Although McCullough in 1890 reported the pres-ence of glycyrrhizin in its rhizome, Fischer and Lynn (/. A. Ph. A., 1933, 22, 1225) could find no glycyrrhizin in this species nor in the licorice fern (Polypodium vulgaref L., var. occidentale}; their sweetness was due to sucrose or other su-gars. In the licorice fern they found also a gly-coside, polypodin.

Propagation of licorice root is best done from runners, though seeds germinate without diffi-culty. The root is dug about every third year, and enough always remains in the ground to re-new itself during the ensuing three years. When the fresh root is brought from the digging fields to the buying stations, piles are made which are turned periodically while the root is "curing." It is usually fit to be baled about 6 months after digging. Thoroughly cured root may have a moisture content of from 8 to 10 per cent; above 12 per cent moisture exposes the baled root to danger of developing mold.

During 1939, there were imported into the United States 62,330,968 pounds of licorice root and 466,269 pounds of licorice extract. A com-paratively small portion of the licorice imported into the United States is used by the drug industry, the greater bulk of the huge supply which is annually coming into our ports being con-sumed by the tobacco and confectionery trades and in fire extinguisher compounds. The root is collected alike from wild and cultivated plants, cleaned and variously prepared for the market.

Licorice is often offered for entry that is poorly dried, moldy, insect infested or partially decayed; such roots should be rejected.

"Histology.—Rhizome with numerous layers of yellowish brown cork cells, absent in the peeled drug; one or more rows of cells with a tendency of collenchymatous thickening; a middle bark of starch-bearing parenchyma and groups of fib-ers more or less surrounded with crystal-fibers; inner bark with radial arrangements of phloem and medullary rays, the phloem consisting of wedges of small groups of bast-fibers more or less surrounded with crystal-fibers and pa-renchyma separated tangentially by sieve tissue, the cells of the latter with thick, highly refract-ing walls; medullary rays from 1 to 8 cells wide; wood-wedges broad, consisting of large tracheae with yellowish walls, small compact groups of wood-fibers more or less surrounded with crystal fibers, tracheids, and starch-bearing parenchyma; pith of large, more or less polygonal, starch-bear-ing parenchyma or occasionally containing prisms of calcium oxalate. In roots the pith is absent. "Powdered Glycyrrhiza.—Brownish yellow (unpeeled Licorice) or pale yellow (peeled Lico-rice) ; starch grains numerous, mostly simple and elliptical, oval or spheroidal, from 2 to 20 microns" in diameter; tracheae mostly with bordered pores up to 200 microns in diameter; wood- and bast-fibers numerous, very long, much attenu-ated at the ends and about 10 microns in width; crystal-fibers with monoclinic prisms of calcium oxalate, the latter from 10 to 30 microns in length; fragments of reddish brown cork cells which are practically absent in the powder pre-pared from peelel Licorice." U. S.

A character said by Rothrock (.4. /. P., 1884) to be diagnostic of glycyrrhiza is the occurrence of crystal fibers adjoining the wood and bast fibers. These are recognized in the official description of the powdered drug. In the Russian root the parenchymatous wood-cells are larger than in the Spanish. The powder is of a grayish-yellow color, when the root is pulverized without being deprived of its epidermis; of a pale sulfur-yellow, when the epidermis has been removed.

Constituents.—Licorice root contains from 5 to 10 per cent of its characteristic principle glycyrrhizin; in addition there are present 5 or 10 per cent of sugars, some bitter substances, be-side resins, cellulose, lignin, etc.

Glycyrrhizin, occurring in the root as the cal-cium and potassium salts of glycyrrhizic acid, is approximately 50 times as sweet as cane sugar, and its sweetness is detectable at a dilution of 1:15,000. The solution of glycyrrhizin in hot water gelatinizes on cooling. It does not occur in that part of the licorice plant which grows above the ground, and is known in no other plant, except perhaps in minute quantities, and even this is questionable. Pure glycyrrhizic acid is white, and may be prepared from licorice root (preferably decorticated) by first removing bitter principles and other substances with 95 per cent alcohol, and then extracting with dilute (30 to 50 per cent) alcohol. The extract is evaporated to dryness and dissolved in water, the glycyr-rhizin precipitated with dilute sulfuric acid, washed with water, dissolved in alcohol and precipitated as the tertiary potassium salt with a solution of potassium hydroxide. The yield of tertiary potassium salt is about 6 per cent of the root. It is converted to the primary potas-sium salt by crystallizing from glacial acetic acid, and pure glycyrrhizic acid is finally obtained by precipitating the lead salt and decomposing this with hydrogen sulfide (see Houseman, A. J. P., 1916, 88, 97).

The chemical composition of glycyrrhizic acid is not known; there is not even agreement on its empirical formula. Tschirch and his pupils con-sidered it to be the di-glucuronic ester of glycyr-rhetic acid and assigned to it the formula C44ll64Oi9, but subsequent investigators have reported widely different formulas. (See Karrer, Helv. C. A., 1921, 4, 100; Bergmann, Biochem. Zeit., 1933, 267, 296). Robert (1915) and Ruzicka (Zeit. P. C., 1929, 184, 69) believe that it is related to the saponins but even this is not established. Houseman (loc. cit.) reports a hemolytically active saponin in the inner bark of licorice root.

For the quantitative determination of glycyr-rhizin in licorice root the method of Houseman, referred to under Extractum Glycyrrhiza, may be used, but when applied to root, a preliminary extraction with ether is desirable in order to re-move ether-soluble resins which are present in the root but not in the extract.

Under the name of Glycyrrhizinum Ammonia-turn (Ammoniated Glycyrrhizin, Glyzina), the U. S. IX recognized a material prepared by precipitating crude glycyrrhizic acid from, a solution of licorice extract by means of dilute sulfuric or hydrochloric acid, dissolving the well-washed precipitate in ammonia water and drying the solution on glass or other suitable surface. Lus-trous black flakes are formed as the solution dries.

Uses.—The great majority of the licorice root entering this country is extracted for use in the tobacco industries as a flavoring and conditioning agent. The residual material of the root after extracting licorice is used as a fertilizer for mushrooms and in the manufacture of foam fire extinguishers.

Powdered licorice root is used for various pharmaceutical purposes as in the preparation of pills, either to give due consistence or to cover their surface and prevent them from cohering, and as a diluent of powdered extracts, etc. As a remedial agent it has been almost entirely replaced by the extract.