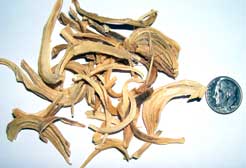 The sliced bulb of the white squill called Sea Onion

Squill
"Squill consists of the cut and dried fleshy inner scale of the bulb of the white variety of Urginea maritima (Linne) Baker, known in commerce as White or Mediterranean Squill, or of Urginea indica Kunth, known in commerce as Indian Squill (Fam. Liliaceae). Squill contains not more than 2 per cent of foreign organic matter, and yields not more than 2 per cent of acid-insoluble ash."

Squill Hydo-Alcoholic Extract made by the Lilly Company in 1908

Squill Uses
In the past century, (1800's), squill was used by the medical profession as a diuretic and nauseate; these effects were generally attributed to local irritation of the kidney and stomach respectively. Today, (1940), however, it is classed with the digitalis group and it is generally believed that its diuretic and emetic effects are secondary to its cardiac action. That it exerts upon the heart the characteristic effect of digitalis is abundantly established but it appears to differ somewhat in its effects from digitalis itself. Fahren-kamp (D. A. K. M., 1924, 145, 109) says that it is a mistake to regard it as merely a substitute for digitalis; that in certain types of cases it is superior to digitalis although generally speaking digitalis is more effective in the majority of cases of cardiac decompensation. The outstanding differences are:—First, it is relatively more potent in its vagal action and less potent in its muscular effects. For this reason it is usually superior to digitalis in the treatment of tachycardias. It is also generally conceded to be more rapid and less persistent in its effects and therefore comparatively free from danger of accumulative action (see Weber, Med. Welt., 1940, 14, 118). There is some difference of opinion as to its comparative diuretic influence. White et al. (}. A. M. A., 1920, 75, 971) report that in their cases there was rarely any evidence of diuresis but Kahlen (D. M. W., 1939, 65, 1667) and Stoll (Helv. C. A., 193S, 18, 644) state that it is more actively diuretic than digitalis.

Squill Dosing
Violent vomiting and purging have been reported from overdoses of squill but according to Madaus and Koch (Zeit. Ex. Med., 1939, 107, 199) the local irritation of squill is due to the presence of raphides and is therefore not a property of solutions from the drug.

Clinical experience indicates that the absorption of squill from the alimentary canal is very uncertain. Urginin has, however, been recom-mended for oral administration; it is marketed in the form of tablets each representing 0.5 mg. Olso grain) of which from one to two tablets may be given two or three times a day. The N. N. R. gives the intravenous dose of scillaren-B as "not more than 0.5 mg. (Visa grain)" in the 24 hours; and the oral dose of the mixed total glycosides of squill as from one-eightieth to one-fortieth of a grain (0.8-1.6 mg.).

Constituents of Squill
The active principles of squill have been variously reported as scillipicrin, scillitoxin, scillin, scillenin, scillimarin, scillitin and scillidiuretin but, according to Stoll {The Cardiac Glycosides, 1937), these are not the true constituents. In many cases the products have been obtained from dried squill in which alterations of the constituents present in the fresh material have almost certainly occurred. Some of the products are but purified extracts of the drug. The work of Stoll and his associates on fresh squill, under conditions avoiding enzymatic change and degradation by chemical agents employed in the process, has led to the isolation of at least two glycosides, crystalline scillaren-A and an amorphous fraction called scillaren-R, the latter consisting probably of at least two glycosides. Scillaren-A comprises about two-thirds of the glycoside content. It is very easily split into other compounds ; the enzyme scillarenase, present in squill, causes it to lose a molecule of glucose and leave pro scillaridin-A which can be further hydrolyzed by acids to a molecule of rhamnose and the steroid aglycone scillaridin-A. Stoll prevented enzymatic hydrolysis of scillaren-A during the extraction process by the addition of salts, such as ammonium sulfate. Acid hydrolysis of scillaren-A yields scillaridin-A without producing the intermediate glycoside, but the sugar that is first split off is scittabiose, a disaccharide; continued hydrolysis splits the last-named into rhamnose and glucose. Because scillaren-A is only sparingly soluble in aqueous solvents, and the resulting solutions are easily hydrolyzed to the less active and less soluble aglycone, this pure crystalline glycoside is not well suited for therapeutic use.

Squill Dosages as of 1967
Scillaren (Sandoz). The total glycosides of squill, available as Tablets of 0.8 mg.; and as a Solution for oral use containing 0.8 mg. per ml. (20 drops). For patients who are refractory or hypersensitive to digitalis. Dose: 1 to 2 tablets, or 20 to 30 drops, thrice daily.