The first drugstore in America has been a topic of many debates. 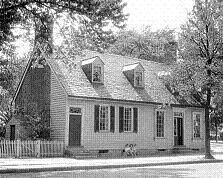 The first drugstore in America located in Fredericksburg?

The First Drugstore in America
The first drugstore in America has been a topic of many debates. Depending upon ones criteria of what constitutes a drugstore one may pick one over the other. We wish to stay out of the debate and allow you to make up your own mind. 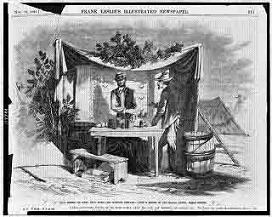 Civil War Drugstore
This is an artist rendering from the Civil War era, circa 1864, of a battlefield drugstore. While one could say this really isn’t a drugstore but an Army dispensatory it is worth noting that during this period the real modern American drugstore was just beginning.

The golden age of the American drugstore circa 1890

The Golden Age of the American Drugstore
While the American drugstore can trace its roots to colonial times the real American drugstore began around the Civil War era. It was during this time that the scientific method came into vogue and many new drugs were discovered. Prior to the 1860’s most, if not all, medical knowledge was nothing more than unsubstantiated antidotes. While many of these antidotes were true the majority were false.

Thus the golden age of the American drugstore began with the introduction of scientific fact into pharmacy and medicine. It was around the 1860’s when pharmacy went from alchemy and conjecture to the modern and golden age of the drugstore. The pictured corner drugstore dates to the 1890's. 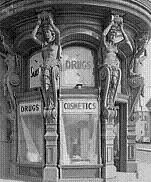 Drugstore Art Nouveau Style of Architecture
Notice the architectural Art Nouveau style of the entrance to this classic drugstore. This type of design is indicative of the period prior to mass communication when the architecture of a building was the only means to announce to the customer the expectation to be found within. This type of style would depict a strong traditional drugstore with roots into the Grecian era of science.

A passing customer would be assured that any medication dispensed from within would be of the highest purity. After all, only a very successful and self-assured druggist would have the audacity to decorate his drugstore in such a manner. This drugstore would date to around the early 1900's. It is worth noting that many drugstores prior to prohibition didn't have a soda fountain or sandwich counter. 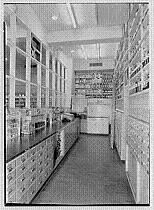 Drugstore dispensatory from the 1920's

Drugstore Dispensatory from the 1920's
Notice the traditional design of this dispensatory in a 1920’s compounding drugstore. There is a place on the right for storing prescription files as well as compounding formulas. Above on the right notice the label under glass medicine bottles that contained plant extracts and inorganic ingredients that would be used to compound a patient’s prescription. The left is the work area and more storage for herbals and various pharmaceuticals. These cabinets from the golden age of pharmacy would make a great addition to any drugstore museum. 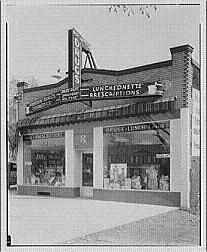 Traditional drugstore entrance from the 1940's

Traditional Drugstore Entrance
This is a traditional drugstore entrance that would be common on any Main Street USA. Notice the signage, which reads, “Drugs” and “Luncheonette and prescriptions”. Most drugstores of this post 1920 era offered meals as well as the complete soda fountain ensemble. The drugstore symbols of a mortar and pestle as well as the Rx over the door all make sure that any passerby would not mistake this drugstore for some other type of establishment.