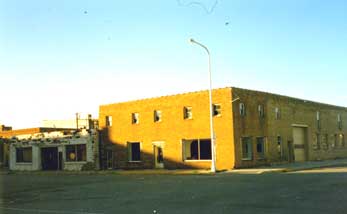 Bob Swedberg, a native of Wolf Point, Montana, was a pharmacist at John Thro's Drugs in Mankato upon graduation from the University of Minnesota School of Pharmacy.
In 1955, Bob and his wife, Kathy, purchased the Schaefer Brothers (Pete and John) business and building at 324 South Minnesota Avenue upon the death of John, the pharmacist. The Schaefer brothers' store, prior to Swedberg's was reminiscent of the year it was built- 1879.

The Swedbergs lived above the store for a year and a half before leasing the quarters to Dr. A. Henry Thompson for his medical offices. Dr. A. Henry, in 1963, moved his practice to the new medical building at 206 West Walnut Street, when he and dentists Dr. R. E. Larson and Dr. Joe M. Dobie built the new facility.

Swedberg's, with a growing business, added 1,400 square feet to the existing building in 1968, making a total floor space of 3,000 square feet.

In 1971, Bob further improved the historic building with a new front and colonial brick entry approach.

Bob, in 1978, leased the building to Bud Braun for his department store while Bud leased his store to Bridal Manor, now Sue Cook's Bridal Boutique.

from Jim Randolph's Chevrolet. The garage was demolished for a new 7,000 square foot modern building and parking lot.

The old garage once was a livery stable owned by W. A. Pell in 1876-the historic place where he traded horses with the infamous Jesse James the day before the Northfield Bank robbery.

Bob's son, Gary, a 1975 graduate of the University of Minnesota School of Pharmacy, who apprenticed for 13 years under his father's tutelage, became co-owner of the business in 1977.

The business today has 19 employees who service and sell thousands of items from the well-stocked store.

In his 30 years as a St. Peter businessman, Bob has had the concern and welfare of the community in his heart. Being interested in photography, he has put together a slide and audio presentation, "The Story of St. Peter", that received the "Cities Alive" award in 1970. The presentation has been periodically updated with Ken Lundberg, manager of KRBI, as narrator.

The organizations Bob has been active in, or served in, include the City Council, Chamber of Commerce Board of Directors, Retail Council (one of the organizers), First Lutheran Church Council, Community Hospital Commission, Nicollet County Bank Board (10 years), Lions Club (20 years), Nicollet Lodge #54 (Masons), United Way Board, Red Cross, Junior and Senior High School Addition Committees, the latest being the Indoor Swimming Pool and Theater Committee.

Father-Son Drugstore Expands
Construction was to start this week for a continuing father-son drugstore business in St. Peter. Bob Swedberg and son Gary, of Swedberg Drugstore, couldn't be happier about the move to a new location that will feature expanded service to the community.

The business will be located at the corner of Third and Park Row, where the Randolph-Buick garage building once stood. Both father and son expect the store to be occupancy ready by late winter of next year.

The new store, to be operated under the Snyder's franchise, will be larger in terms of physical space but said Gary, "We hope to maintain small store atmosphere and service." The store will be self-serving.

The new building is designed to accomodate the handicapped including use of wider doors. There will be double aisles, room enough for two grocery size carts to pass each other Gary explained.

They could have saved space and made money by using narrow aisles but they decided it was more important to "cater to the customer already cultivated to their family business" as well as to "attract new customers to the store."

Under the Snyder franchise the Swedbergs will be able to offer a wide variety of items ranging from picnic supplies to auto glassware. The store can also maintain an expanded gift and card department as well as the prescription department said Bob.

The new store will be two and one half times the size of the building where the business is now located. The present location is on Minnesota Avenue.

Describing it another way, one of them offers the example, the other agreed, that the new store will be a little larger than the St. Peter National Tea.

The low bid for the general contract of the new building went to A.J. Hoffman & Son, Mankato with subcontractors from St. Peter.

"Modern merchandizing techniques demand more space," said Bob about the move. The building on Minnesota Avenue has been remodeled seven times over 25 years to meet the growing demand for more space.
The business now employs 18 full-time and part-time people. The move will probably create the need for more people with added employment, Bob said.

Gary, a pharmacist like his father, became a partner in his father’s business January 1 last year. He graduated from a five-year course at the Pharmacy College at the University of Minnesota. Bob graduated in 1951.

Originally from Montana, Bob lived in Mankato and worked as a pharmacist before moving to St. Peter. In 1955 he bought the store which was then known as the Schaefer Brothers Drugstore. The store itself has been in existence as far back as 1899 he said. 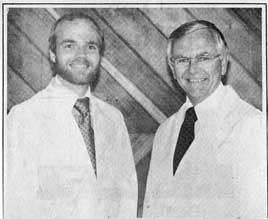 Grand Opening Ad for New Store
Soon we will begin our twenty-fifth wonderful year in St. Peter, and we - Gary & Bob Swedberg - are happy to announce the opening of our new, ultra-modern (and Unique, we believe) corner Drug Store! We have been fortunate to obtain a Snyder Drug Franchise and we feel sure you will enjoy the super sales and savings we are planning for everyone!

So come see us now, during our Grand Opening celebration!! 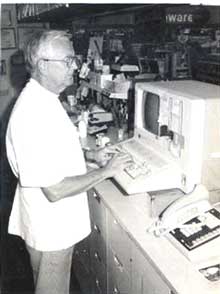 Bob works at one of the first pharmacy computers in Minnesota